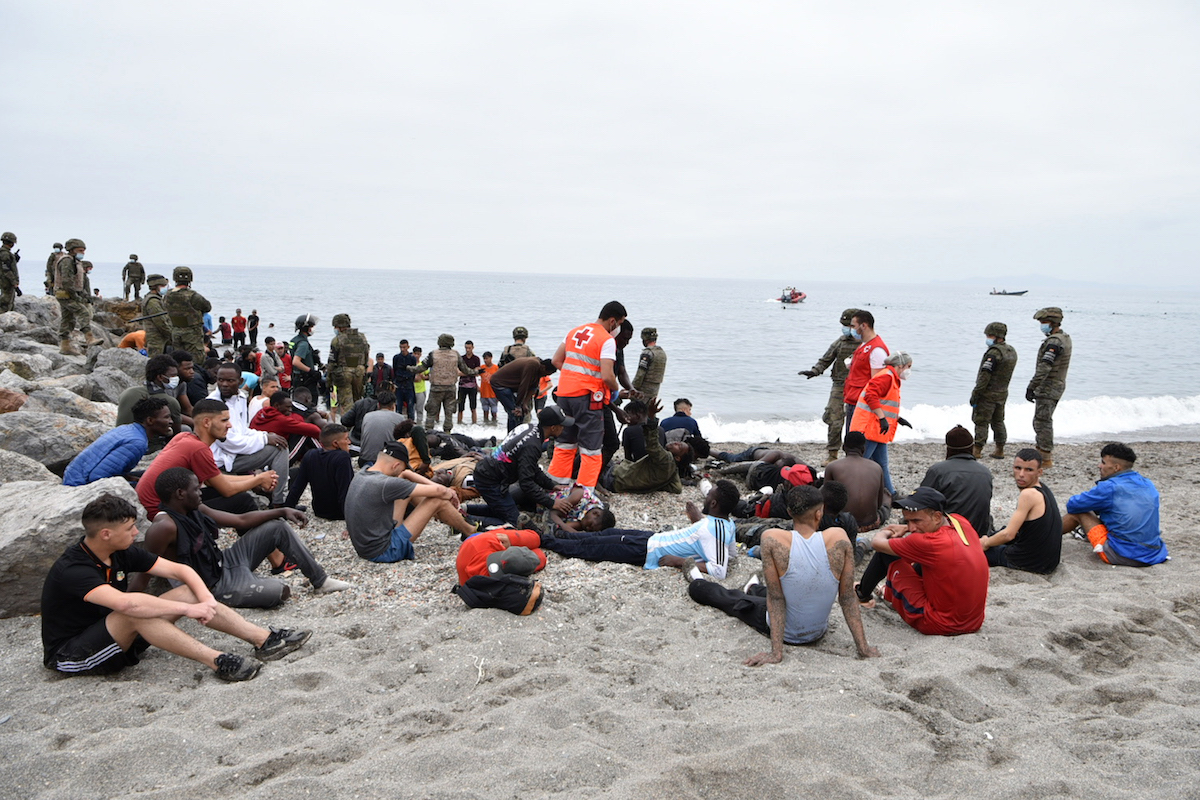 Migrants from Morocco arriving in Ceuta

About 2,700 of the 6,000 migrants who have entered Ceuta illegally in the past few hours have already been returned to Morocco, Spanish Interior Minister Fernando Grande-Marlaska announced this Tuesday.

The border of Tarajal, which separates the Spanish autonomous territory of Ceuta from the kingdom of Morocco, registered in the last hours the entry of six thousand people, writes the The country, who mentions that the majority of people who entered the Spanish enclave have Moroccan nationality and entered swimming or walking, due to the “passivity of the authorities”.

The Spanish army was then deployed to the site, and about 2,700 of the 6,000 people who entered Ceuta illegally in the last few hours were returned to Morocco.

At a press conference after the Council of Ministers at which the issue was addressed, Fernando Grande-Marlaska said that the Government is putting in place from the first moment all the necessary means to protect the citizens of Ceuta and to return “through established channels” those who are illegally entering the autonomous city.

“Ceuta is both Spain and Madrid, Seville or Barcelona,” said the minister, who stressed that the executive “will not give up even for a minute” trying to turn things around and will continue to “be energetic in defending borders”.

The Minister of the Interior (Internal Administration) assured that the Spanish executive will proceed to “Immediate return” of people who are “illegally” entering the country.

For her part, the Government spokeswoman, María Jesús Montero, called for “tranquility”, “trust” and also “solidarity” with the citizens of Ceuta and Melilla and “from the south of the country” in the wake of the migratory crisis suffered in the last hours in the autonomous city of Ceuta.

At the same press conference, Montero launched a message in a “clear and roundabout” manner against “xenophobic messages” that, in his opinion, seek to criminalize migrants or to associate them with criminal behavior.

“The last thing a migration crisis of this nature needs is for political leaders to arouse fear or hatred. What we ask of everyone is responsibility, prudence and a sense of state in order not to give rise to situations that may generate more fear or tension among citizens ”, he observed.

One of the targets of the message was the president of the extreme right-wing Spanish party Vox, Santiago Abascal, who announced that he would go to Ceuta to support the “compatriots”, after the avalanche of immigrants who arrived in the autonomous city.

“Morocco is invading Ceuta with thousands of assailants for the government’s cowardly and criminal inaction that surrendered our southern border, ”said Abascal on Monday night in a message broadcast on social media.

The border that separates the Spanish autonomous territory of Ceuta from the kingdom of Morocco registered new entries of Moroccan citizens “by sea”, having the Spanish army mobilized troops to the place.

Spain will be firm to restore order

The Prime Minister of Spain, Pedro Sánchez, guaranteed this Tuesday in Madrid that the country will be “firm” to restore order on the border with Morocco and announced that today it will travel to Spanish cities in North Africa.

In an institutional statement, Sánchez ensured that Spain’s territorial integrity and tranquility of the citizens of Ceuta and Melilla will be guaranteed “With all the necessary means” and in any eventuality or circumstance.

My priority at this time is to restore normalcy to Ceuta. Its citizens must know that they have the absolute support of the Government of Spain and the utmost firmness to ensure their safety and defend their integrity as part of the country in the face of any challenge.

“My priority is guarantee ”traffic control at the border with Morocco, provide Ceuta and Mellila with all the means to resolve the humanitarian crisis and proceed to the “immediate return” of all those who entered illegally, said Pedro Sánchez.

Even so, the Spanish Prime Minister considered Morocco as an “associate and friend” country and argued that it must continue to be so.

About 2,700 of the 6,000 migrants who have entered Ceuta illegally in the past few hours have already been returned to Morocco, the Spanish Interior Minister, Fernando Grande-Marlaska, had announced a few minutes before Pedro Sánchez’s statement.

The border that separates the Spanish autonomous territory of Ceuta from the kingdom of Morocco registered today new entries of Moroccan citizens “by sea” having the army of Spain mobilized troops for the place.

At least five thousand migrants, including one thousand minors, had already arrived in Ceuta on Monday throughout the day, which, according to Spanish authorities, was a “record” number.