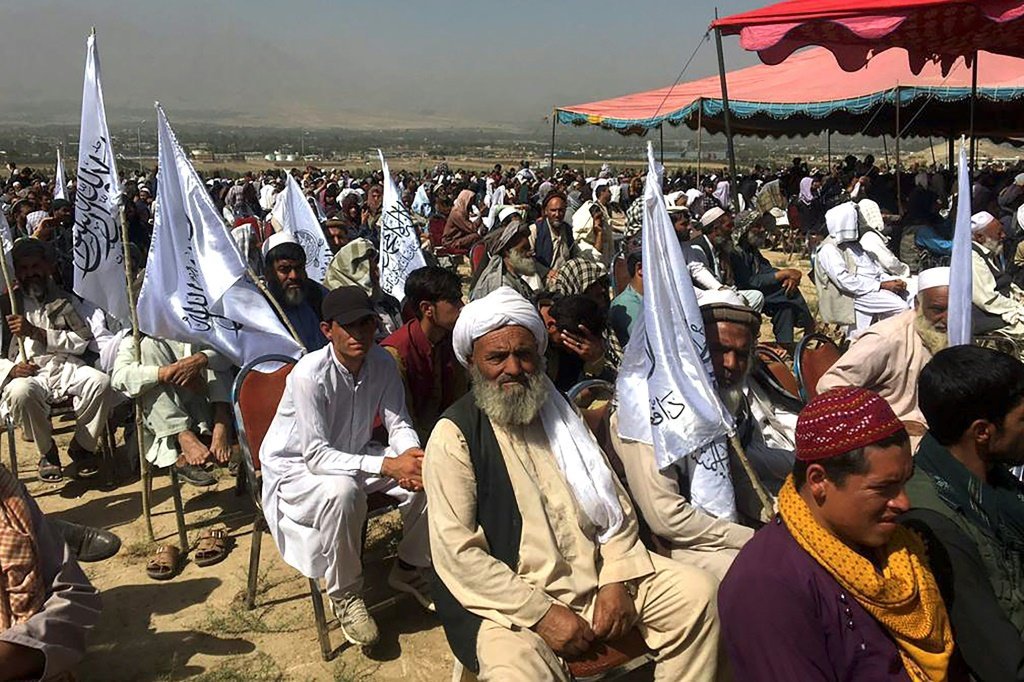 Nearly 1,500 Taliban sympathizers gathered on Sunday (3) to celebrate the victory in Afghanistan at the first meeting held outside Kabul, seven weeks after the fundamentalists’ return to power.

The concentration took place in the municipality of Kohdaman, near the country’s capital.

On the podium, Mawlawi Muslim Haqqani, deputy minister of religious affairs, praised the victory of the Islamist movement, which he said marks the defeat of “Christians and Westerners”.

Only men and boys were present at the celebration, organized in a vacant lot.

Outside, dozens of armed guards watched as Taliban fighters arrived in pickup trucks.

“America defeated. Impossible. Impossible. But possible,” said one of the welcome songs, despite the fact that the music is, in theory, banned by the Islamist movement.

The act began with a parade of armed men dressed in combat clothing and displaying the Taliban flag with the profession of Muslim faith. Some carried rocket launchers on their shoulders.

Many civilians who attended the meeting wore traditional clothing. Most were unarmed. When the organizers arrived, they chanted the traditional “takbir”, the religious phrase “Allah Akbar” (God is great) repeated over and over again. Some shouted pro-Taliban slogans.

Another speaker, who identified himself only as Rahmatullah, said that after a 20-year war in the country, where fighting appears to have stopped, victory was possible thanks to “the ranks of young people who presented themselves as candidates for martyrdom”.

“The UN is simply the other name for the United States and its mandate is to destroy Muslim countries. If they accept its terms, they will do no better than the previous government,” said Mohamad Akram, leader of a Taliban command.

Seven weeks after taking power, the “Islamic Emirate”, a new regime decreed by the Taliban, is trying to establish its legitimacy both among the population and internationally.

Thousands of Afghans and part of the opposition fled the country for fear of reprisals from the fundamentalist movement.

Civil opposition became impossible. Since September 8, the Taliban has cracked down on all demonstrations and has taken “harsh legal action” against those who do not abide by its rules.

In recent weeks, armed Taliban fighters have dispersed demonstrations in several cities, including Kabul, Faizabad and Herat – two people died in the latter.

In the capital, armed militias forcibly dispersed the few demonstrations that brought together some women to demand the right to education.

At the same time, the Taliban invited 300 women, completely covered by veils, to express public support for the new regime at a conference organized at the University of Kabul in September.

In early August, the group announced a government led by Mohamad Hasan Akhund, collaborator and close to the movement’s founder, Mullah Omar, who died in 2013. All members are Taliban and nearly all are Pashtun.

The government faces the challenge of civilian management in a country that is economically paralyzed and threatened by a serious humanitarian crisis.

No country has so far recognized Afghanistan’s new regime, although Pakistan, China and Qatar have all shown signs of opening.

The US Undersecretary of State, Wendy Sherman, will travel to Pakistan during the week and intends to discuss, among other issues, how to pressure the new Taliban regime to respect fundamental rights.