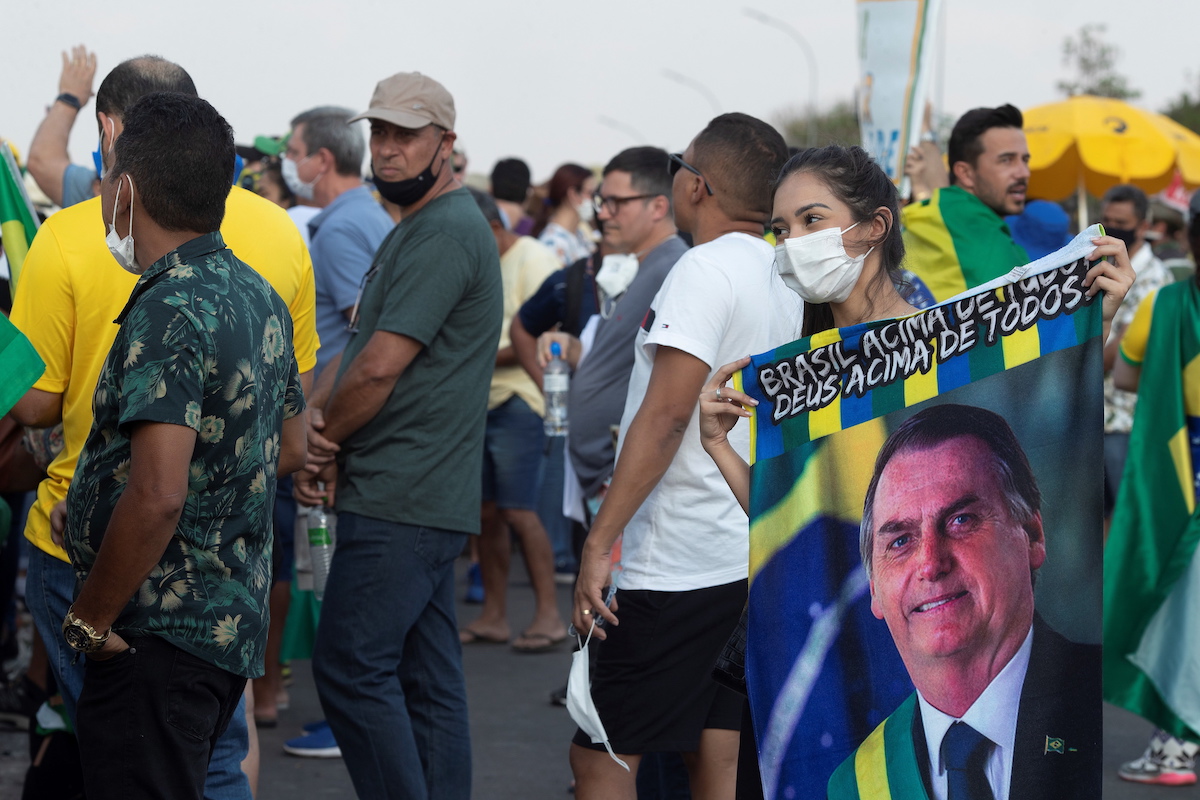 Tension is mounting in Brazil after Bolsonaro supporters pulled down police barriers in central Brasília at marches scheduled for Independence Day. The President also signed an interim measure that makes it difficult to remove fake content from social media.

The marches of Jair Bolsonaro’s supporters that are scheduled for this Tuesday, the day that marks Independence Day in Brazil, all over the country are already causing concern.

According to images collected by Folha de São Paulo, traffic in the center of Brasília, near the Esplanada do Ministérios, had been closed since Sunday night. However, the pressure from protesters in recent hours forced the police had to push aside the barriers and allow cars and lorries driven by hundreds of Jair Bolsonaro’s supporters to get closer to the Supreme Court building.

Several videos have been broadcast on social networks and show the vehicles approaching the Esplanada dos Ministérios and the President’s supporters removing barriers. “The people take over,” shouted one of the protesters.

It is recalled that the police contingent in Congress had already been increased to 5000 agents, due to fears that the marches ended in violence or even become an insurrection similar to the one in January in the United States. Scholarship holders from all over Brazil promised to go en masse to the capital to show their support for the President.

Despite the increase in tension, the police guarantee that they are still in place “to restore the situation”. The demonstrations were encouraged by Bolsonaro at a time when he is experiencing great tensions with the Supreme Court and Congress, especially after the latter did not approve the proposal that would institute the printed vote in the country.

Jair Bolsonaro responded by presiding over a military parade in front of the Chamber of Deputies, after having sowed doubts and spreading false information in recent weeks about the transparency of the Brazilian electoral system, admitting to trying postpone presidential elections next year. Most polls point to a defeat of the current President against Lula da Silva.

About the protests, Bolsonaro even described them last Friday as a “completed” to two members of the Federal Supreme Court – Alexandre de Moraes, who directs the investigations against the President, and Luís Roberto Barroso, who presides over the Superior Electoral Court (TSE), who is investigating the President’s attacks on electronic voting.

On Saturday, Jair Bolsonaro spoke about a possible institutional “break”. “The Federal Supreme Court cannot be different from the executive or legislative power. If there is anyone there who dares to continue acting outside the four lines of the Constitution, that power has to call that person and frame him, and remind him that he has taken an oath to fulfill the Constitution. If that doesn’t happen, any of the three powers, the tendency is for a rupture to happen”, he threatened, quoted by BBC Brasil.

According to two Pegabot reports – a project by the Rio de Janeiro Institute of Technology and Society (ITS Rio) – they are being used bots on Twitter to spread and encourage the marches, writes Público.

The findings reveal that the number of automatic accounts it publishes hashtags in support of the protests grew 14% with the approach of the 7th of September. Nearly 2,300 accounts were identified with a high probability of being bots between 12 and 20 August and that number rose to 2,621 between 22 and 30 August.

Automatic profiles defended the marches in 81,000 publications, which is equivalent to close to one in four publications. Many of the accounts spread too fake content – a profile with 99% probability of being a bot published a video where police officers celebrate and sing together claiming they were preparing for the marches, but in fact the recording was made during the graduation of new soldiers from the Military Police of Rio de Janeiro.

Bolsonaro supporters groups on the Telegram have also become fertile ground for fake news, with the dissemination of videos, photos and texts that announce possible blockages on social networks, stoppages of truck drivers or army movements during the protests.

One of these communities is SUPER GRUPO B-38 OFFICIAL, advances BBC Brasil. The group has more than 35,000 members and declares itself “THE LARGEST BOLSONARO SUPPORT GROUP IN BRAZIL!!!”. Videos of troop movements have been circulating there since last week with comments on suggest that the Armed Forces are preparing something for the 7th of September.

Some of the users themselves warn that the messages are false, and recognize that they are out of context or that they are from old images, while others believe in the veracity of the contents.

The President of Brazil also signed on Monday a new provisional law that establishes rules for use and moderation of social networks and that limits the elimination of published content, which makes it difficult for platforms to remove lies.

The text argues that “just cause” and “motivation” are needed in cases of “cancellation or suspension of account or profile features maintained by social network users”. Platforms will only be able to delete content if it is disseminated by fake accounts, bots, accounts that offer counterfeit products or by court order, advances Público.

Contents must also be returned and accounts must be reinstated in case of “undue moderation”. It is up to the user to assert the right to “adversary, full defense and appeal”.

The Special Secretariat for Social Communication of the Presidency of the Republic (Secom) of Brazil argues that Bolsonaro is reinforcing “rights and guarantees users of the network and fights the arbitrary and unreasonable removal of accounts, profiles and content by providers”.

Why did Bolsonaro edit the Provisional Measure, which takes effect immediately, freeing users to spread disinformation on the eve of September 7th?

In Brazil, provisional projects are edited by the President and have the force of law for a period of up to 120 days, but National Congress approval required to become laws in the end.