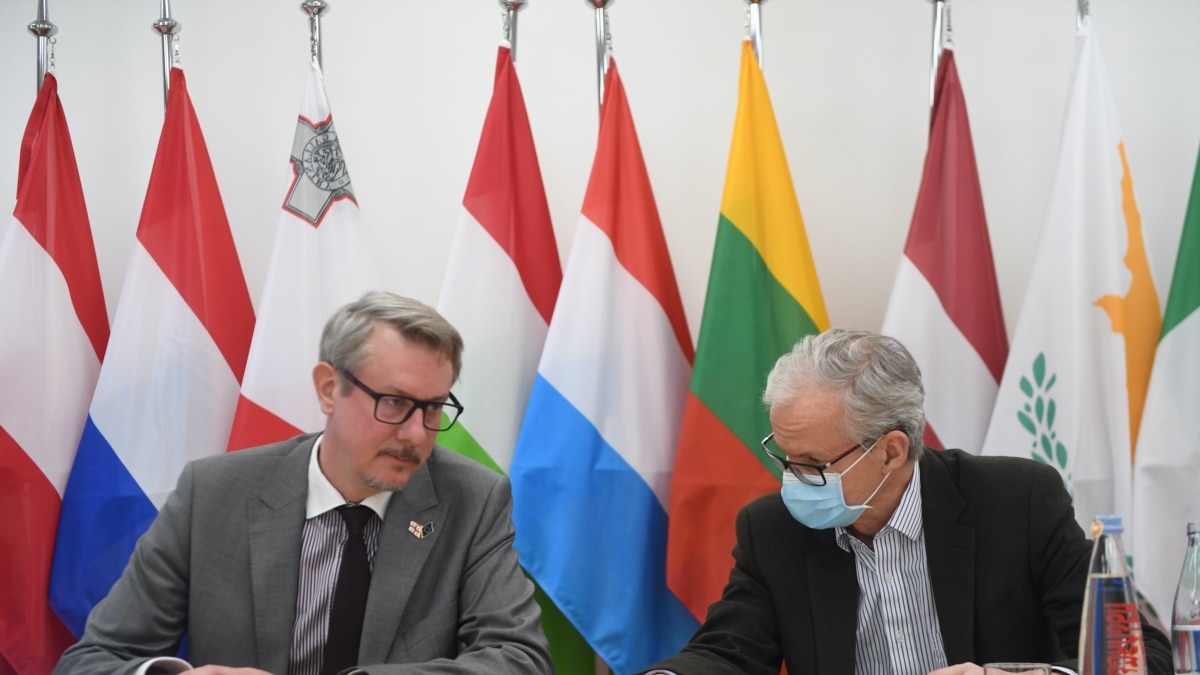 Georgian Dream spokesman Archil Talakvadze’s statement that the ruling team is ready to sign Christian Danielson’s document has challenged the opposition. The Special Representative of the President of the European Council, Charles Michel, has visited Georgia several times in order to make an agreement between the government and the opposition possible.

Archil Talakvadze stated at the briefing that “Dream” is signing the document publicly and is ready to accept and fulfill the conditions written in it. The dream was considered impossible to sign this document on March 30, when the representative of the President of the European Council was in Tbilisi on duty and presented the results of many hours of work. Talkvadze explained the refusal at that time and the current consent as follows: “At the final stage of the dialogue, we noted the principle of readiness to sign the document, which was also stated by many oppositionists in their comments, but we have not signed yet because we expected steps from the opposition. “Wait until the ambassadors hold additional consultations.”

The Speaker of the Parliament also stressed that the document does not include the issue of holding snap elections, explaining that the Western partners have no questions about the conduct of the 2020 parliamentary elections and the legitimacy of the results.

Archil Talakvadze does not consider the opposition uniform. According to him, it is divided into “radical” and “moderate” parts. The ruling team offers a kind of compensation to the opposition, which is to impose a 40 percent “lock” on the self-government elections. “We are not only signing the document developed by Christian Danielson, but we are also expressing our readiness to apply the principle of 40% support in the forthcoming self-government elections. We see the state of the opposition, how its radical part is trying to destabilize, while the moderate part is looking for a way to make a decision in a way that preserves the face. “Georgian Dream will pass this test without any problems, and thus we consider the constructive part of the opposition that we will facilitate the decision-making,” said Archil Talakvadze.

The opposition accepted the proposal from the government in a really mixed way. Based on their reactions, it is expected that there will be opposition forces who will agree to sign the document and enter the parliament, and those for whom such an offer is offensive. A significant portion of the opposition notes that their two, most important ones, were ignored by no one. People considered political prisoners by the opposition, including Nika Melia, the leader of the United National Movement, and Giorgi Rurua, the founder of the Main Channel, remain in prison. Nothing is heard about the forthcoming elections.

The Voice of America recorded several opinions on the consequences of the opposition’s initiative to sign the “Dream” agreement.

“Dream has achieved victory and it deserves approval in the eyes of the West,” said Gorna professor Tornike Sharashenidze. “Georgian Dream” took all the steps for the image of the winner. The opposition, I think, will eventually lose its unity. Several parties will enter parliament. Part of the “National Movement” and “European Georgia” will remain outside the parliament. The latter has, in fact, disintegrated. Its members who have a mandate, I think we will see in Parliament. “Lelo” I do not know what he is doing. The “cone”, or part of it, is in fact included, just as the “Strategy Builder” is likely to enter parliament. Consequently, the dream achieved its main goal: to leave the main opponent of the “National Movement” on the streets. I suppose this is a realistic scenario, “Sharashenidze told us.

Tornike Sharashenidze believes that small parties that refuse to enter parliament will eventually lose their chance. The next elections will be more difficult for small parties because the threshold is high for them. Therefore, whoever rejects the parliamentary mandate now, the “National Movement” will crush everyone for the future – this is his opinion.

The National Movement is the largest and strongest opposition team. His representatives are not going to accept Talakvadze’s proposal and have already stated their position on it. Ivane Chkhikvadze says that if Nika Melia stays in prison, it is inconceivable that the National Movement would agree to any kind of agreement. Especially when the supporters of this team eagerly expect the party to express and affirm its loyalty to the leader.

According to the latest IRI survey, a significant portion of the population expresses a desire to see opposition parties, those they support, in parliament. The opposition is now under a kind of pressure, Ivane Chkhikvadze believes. On the one hand it is under pressure from Western partners, from those who are pushing to enter parliament, and on the other hand sociological research confirms a similar desire on the part of the public.

On the other hand, the “National Movement” may lose a certain number of supporters if they agree to sign the existing version of the agreement, but at the same time, they will win in the eyes of Western partners – Vano Chkhikvadze believes.

The main target of the struggle for the “National Movement” and the rest of the opposition are different – says Tornike Sharashenidze. The main opposition force wants to come to power. Other, smaller parties even enter parliament. These are different purposes. Therefore, the National Movement will remain on the streets to shake up the “dream”, but along the way it has lost an important tool: the support of the West.

The united opposition announced a few days ago that it has a plan that includes mass mobilization and long-term street rallies by May 15. They have already started the work for this – meetings were held in the regions as well. The decisions made by the leaders in the coming days show how much the “Dream” will shake and split the opposition.