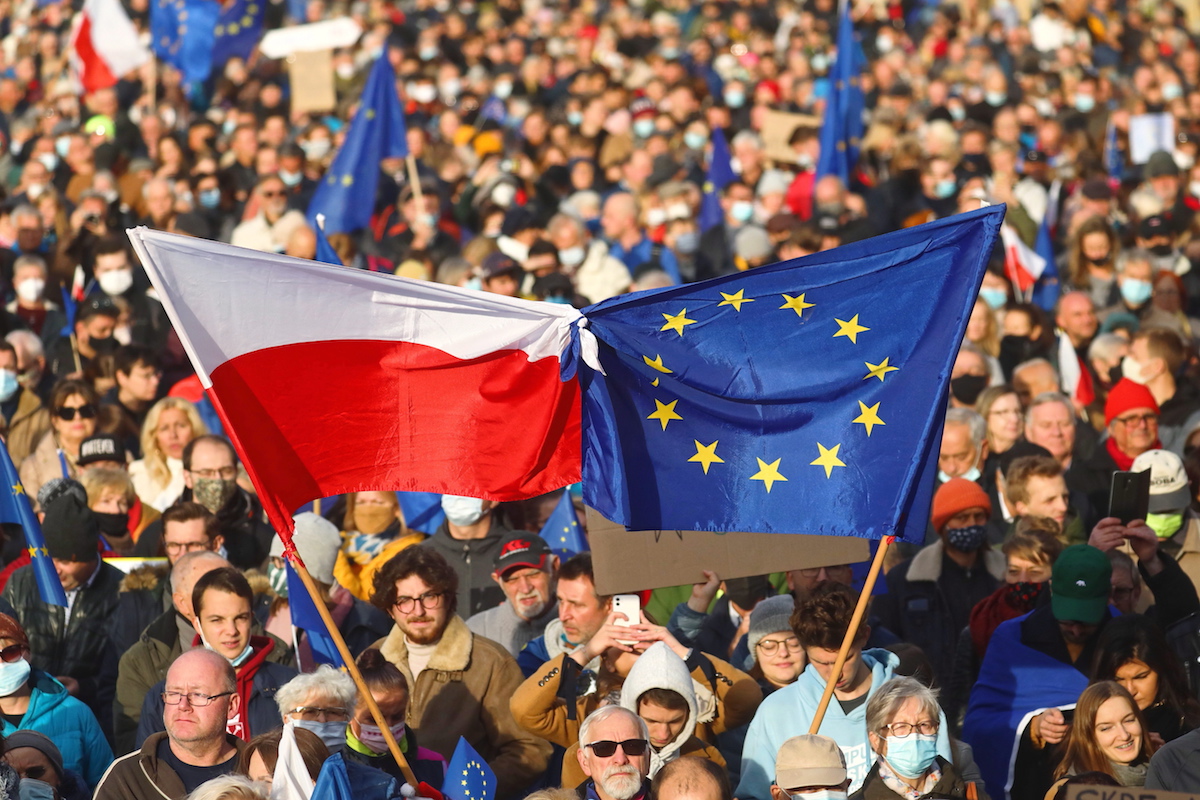 Several Polish cities were the scene, this Sunday, of large protests in defense of membership of the European Union (EU), after the Constitutional Court of the country has ruled that the Polish constitution annuls some EU laws.

Critics of the right-wing nationalist government fear that last week’s ruling by the Constitutional Court can lead to ‘Polexit’, or Poland being forced to leave the EU due to an apparent rejection of the laws and values ​​of the European Union.

Thousands of people in Warsaw filled Castle Square in the historic center of the capital, where some held up posters with phrases such as “we are Europeans” and shouted: “We will stay!”

Donald Tusk, the main opposition leader in Poland and former president of the Council of Europe, called the protest, calling it a effort to defend continuity Poland’s membership in the group of 27 EU Member States.

Tusk vehemently denounced the actions of the ruling party, the ultra-conservative Law and Justice (PiS), led by Jaroslaw Kaczynski, which has been in conflict with the EU for six years as his party seeks greater control over the courts. The EU sees the changes as an erosion of the democratic system.

EU membership is extremely popular in Poland, having brought a new freedom to travel and a dramatic economic transformation to the central European nation that endured decades of Communist rule until 1989.

Addressing the thousands of protesters, Tusk said that a “pseudo court […] by order of the party leader, in violation of the Constitution, he decided to take Poland out of the EU”.

“We want an independent Poland, law-abiding, democratic and fair“, said Tusk, before the protesters sang the national anthem.

Kaczynski has denied his intention to withdraw Poland from the EU, although members of the ruling party have recently made statements suggesting that this may be their goal.

On Friday, the Polish prime minister also said that the country should remain in the European Union, having considered that joining the European bloc was one of the “strongest points” in the country’s history in recent decades.

“Poland’s place is and will be among the family of European nations”, declared Mateusz Morawiecki through Facebook.

The state broadcaster, a spokesman for the ruling Law and Justice party, published news during Tusk’s speech that said “Protest against the Polish Constitution” and “Tusk attacks Polish sovereignty”.

In addition to Warsaw, other cities in the country hosted large protests in this area.

Lech Walesa, who won the Nobel Peace Prize for his opposition to Poland’s communist regime, spoke to crowds in Gdansk to applause. Walesa is a frequent critic of the government, whom he accuses of destroying many of Poland’s democratic achievements.

The Constitutional Court’s decision represents a challenge to the primacy of EU law. In a legal decision requested by the Prime Minister, the court found that the Polish Constitution takes precedence over EU law in some cases.

The verdict had been expected for months and was known after four postponements. Just two of the 14 judges who make up the collective voted against the sentence.

The prime minister asked for the review after the European Court of Justice ruled in March that Poland’s new regulations for appointing judges to the Supreme Court could violate EU law and ordered the Warsaw government to suspend them.

The Polish Government is involved in several disputes with the European Union, among issues such as judicial reforms, media freedom or LGBT rights.