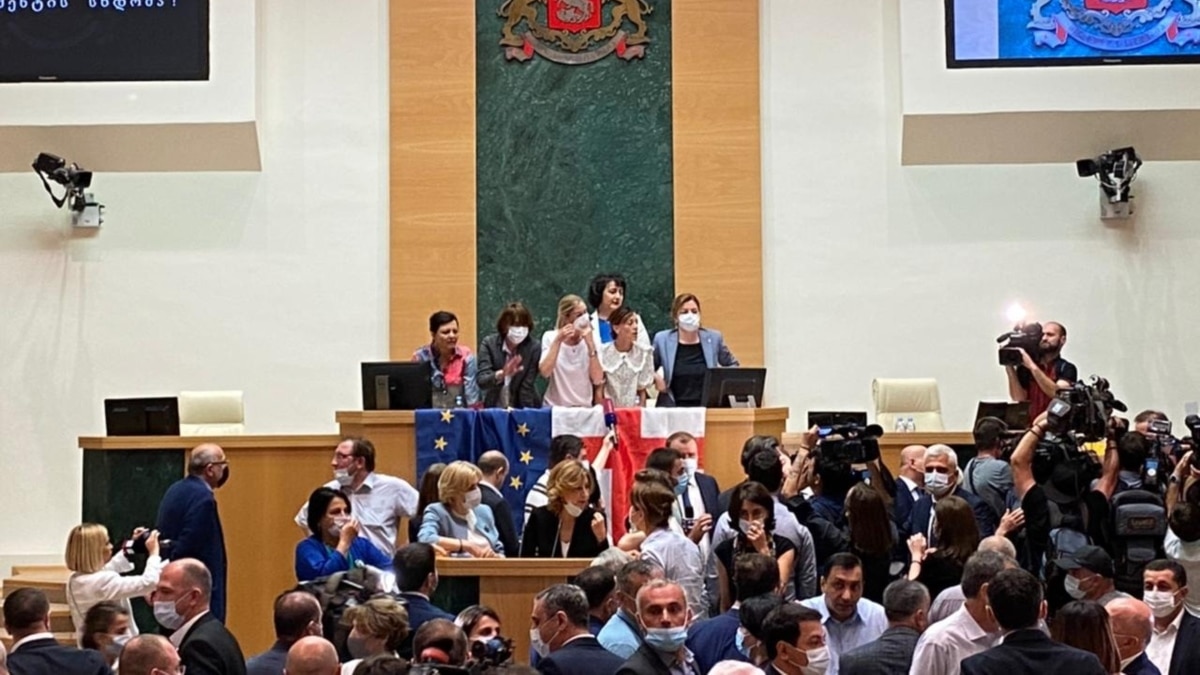 Part of the parliamentary opposition says that the “Georgian Dream” should take responsibility for the current events in the country and Prime Minister Gharibashvili should resign.

“We are protesting against the attack on journalists, the Russian course, the non-fulfillment of the Charles Michel document, the process of appointing judges who were transferred from the” National Movement “and cemented,” said Mamuka Khazaradze.

The leader of “Lelo” told journalists about it after leaving the parliament hall with the members of the faction “Lelo – Partnership for Georgia” amid noise.

Khazaradze believes that the way out of the current situation is a peaceful protest, the resignation of the Prime Minister and a transitional government before the elections.

“Irakli Gharibashvili is the leader of our team, the Prime Minister of the country, therefore, the initiative of” Lelo “can not change anything, especially the” National Movement “”

“We left the courtroom because the policy being pursued in the country, the Russian rhetoric carried out by Prime Minister Gharibashvili at the behest of Ivanishvili in this country, serves to fragment and confront our country. We demand to stop this process. The only correct mechanism is the resignation of the Prime Minister.

“Georgian Dream” will have to take responsibility for this process. Will be alone in this Parliament. Gharibashvili and the government are leading the country into the abyss. Their messagebox is in vain. “The solution is a peaceful protest, a transitional government and holding peaceful local elections. Until then, the Georgian Dream will be alone,” Khazaradze said.

Khatia Dekanoidze, a representative of the United National Movement, says that the UNM-Power is in Unity faction will only vote in the parliamentary vote on the motion of no confidence in the government and the transition to a proportional electoral system. “NM” stops cooperating with the fascist group, “Dekanoidze said.

“We will not continue to participate in this routine process, which is in this hypocritical, fake parliament. We will be with the citizens and journalists of Georgia. It can not continue like this. We will participate in the Parliament only in the process, which involves the issue of declaring a vote of no confidence in the Government of Georgia. We will also take part only in the voting for the Constitution of Georgia, which means the transition to a proportional system. “Otherwise, the United National Movement faction will stop participating in this scandal and cooperating with the fascist group,” Dekanoidze said.

“The Georgian people have long expressed their distrust of Lelo and the United National Movement. They can not conduct any distrust process,” said Anri Okhanashvili, a member of the parliamentary majority and chairman of the Parliamentary Committee on Legal Affairs.

“The solution is a peaceful protest, a transitional government and a peaceful local elections, before that the Georgian Dream will be alone.”

“Irakli Gharibashvili is the leader of our team, the Prime Minister of the country, therefore, the initiative of” Lelo “can not change anything, especially the” National Movement “- said Okhanashvili and believes that the” United National Movement “is behind the recent events.

“The National Movement is always and still behind all this. We do not even want to see where these people stand, what statements they make, what calls they make, this is confirmed by this, it is not our assessment. These are the statements of the members of the “National Movement”, their positioning, their current behavior, what they have done here and the manipulation of human destiny, the use of human death for political purposes. This is all that is confirmed by the facts, “said Anri Okhanashvili, chairman of the Legal Affairs Committee.