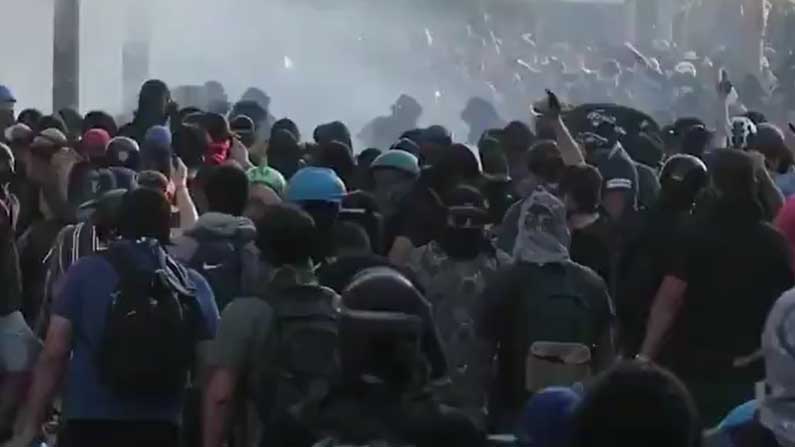 Police in riot gear stormed a rally in Chile on Friday, removing hundreds of protesters by truck. Protesters rally against the police refused to Santiago

Police in riot gear stormed a rally in Chile on Friday, removing hundreds of protesters by truck. The protesters threw stones at the police refused to rally in Santiago. Police tear gas to disperse the protesters, fired water canon.

There was a great deal of concern in Copenhagen against the decision of Denmark in the matter of passports. With the government announcing that only those who have been vaccinated with Kovid 19 will be issued passports and allowed to go abroad, large-scale protests have taken place.

People in Myanmar protest with a three-finger salute over a military coup. Hunger Games organized a huge rally inspired by the movie. Car horns rang and slogans were chanted against the military coup.

Inmates at St. Louis Prison in America create havoc. Chairs and mirrors were smashed. The jail building was set on fire. The water pipes were broken. Prison officials have tightened regulations in the wake of the corona virus outbreak. Authorities said the inmates were involved in violent incidents in the wake of this.

China, which spread the corona virus to the world, is still doing the same. Despite the slowing down of the infection rate, suspicions are being expressed around the world that China is lying in viral cases. Suggest adopting a transparent attitude towards information related to the virus.

The Chinese army supplied corona vaccine to the Pak army. Already 5 lakh vaccine doses have been received. So far 5 lakh 54 thousand people in Pakistan have been infected with corona. The death toll has risen to 12 thousand. The Chinese military has also provided corona vaccines to the Cambodian military.

India, on the other hand, has also decided to send the corona vaccine to Cambodia. Mongolia is planning to supply other islands in the Pacific Ocean soon. China is challenging its dominance in economic and international affairs.

AstraZeneca has announced that their vaccine can only provide limited protection against the South African strain. It is unknown at this time what he will do after leaving the post. But AstraZeneca said it believes the vaccine can provide full protection in these cases.

A resolution condemning former US President Trump will come before the Senate tomorrow. The trial is set to begin on the same day. Trump’s attack on the Capitol Hill building has provoked allegations that he provoked his supporters.

Bill Gates’ warning about the upcoming pandemic corona virus in 2015 has now become a topic of discussion. Bill Gates predicts that the world will be ready to fight the epidemic.

China has misused international systems to be accountable: US Secretary of State