In the 2000s, Alvaro Uribe became the most popular president of the Latin America. One of the main names on the right in the region, the politician commanded the Colombia between 2002 and 2010, in one of the best economic times in the country, driven by overall Latin American growth. His government was mainly marked by a frontal war against the guerrillas in the Colombian jungle – for which it still carries an extensive legion of defenders, but also many critics.

Addressing themes such as the economic recovery, the recent protests in Colombia and the preservation of the Amazon, Uribe gave an interview to EXAM days before participating this Thursday, 16, in the “Forum Freedom and Democracy”, organized by the Institute for Formation of Leaders.

The Colombian will speak, via videoconference, on a panel on the future of Latin America alongside the former Brazilian president Michel Temer.

A decade after leaving power, Uribe maintains his fierce criticism of the peace agreement with the FARC, which yielded the successor and former ally Juan Manuel Santos (2010-2018) the Nobel Peace Prize. “In the name of peace, as they said, they gave absolute impunity to terrorist groups, and what that did was create more violence,” he says.

Meanwhile, at the most difficult time for current President Iván Duque, whom Uribe helped to elect, his political group has been criticized for police violence in this year’s protests — which started with a tax reform that would have raised taxes in a non-progressive way, and have expanded for agendas such as unemployment and demilitarization of the police. The acts left more than 60 dead, most of them civilians.

Like Brazil, Colombia will go to the polls in 2022. Uribe admits that “there may have been” mistakes in handling the crisis, but he accuses groups he calls “neocommunists” of inflating violence to win the election.

In a brief self-criticism, however, he points out that the fight against poverty must be a priority, and that growth alone is not enough. “The biggest difficulty for a democracy is to have poverty levels of 42.5% as Colombia has because of this pandemic”, he says, but argues that the economic recovery is happening “in V” in the Duque government, after the fall of 6.8% of GDP last year.

“It is necessary to show simultaneously that the economy is growing and that social policies are advancing.”

Also last year, amidst the pandemic, Uribe was placed under preventive house arrest for nearly two months, accused of manipulating witnesses against a political adversary. The former president was released due to lack of evidence and accuses flaws in the process, but the case made him resign from his seat in the Senate, which he occupied since 2014.

having been called “hero” by Deputy Eduardo Bolsonaro for his position on the FARC, Uribe says he had no opportunity to talk to President Jair Bolsonaro. At the other end, in a position relatively opposite to the Brazilian, the Colombian is more categorical about the Amazon, which occupies 40% of Colombia’s territory: he defends the “scientific use” of the forest and encouragement of tourism, but “no destruction”. See below for the main excerpts from the interview.

The pandemic had a huge impact on Latin American countries, which had already been in crisis before. What are the main challenges for the recovery?
The truth is that in Colombia, the economy grew a lot until 2012, 2013. After that, excessive taxes were imposed, investment incentives ended, public spending and bureaucracy grew a lot, drug trafficking, violence and corruption increased. And that slowed down growth. When President Duque arrived in 2018, lowered taxes, made decisions that rebuilt investment confidence, the economy grew well until February 2020. And then came the pandemic. The government took social measures that helped, but despite this poverty rose. taxes were here [diz, mirando o alto], before the pandemic the Duke government lowered them, and now it is raising them a little to expand social policies. I believe that [o plano] is well balanced. The Colombian economy is in a V rebound, but that we hope will translate into poverty reduction.

We live in a dichotomy between excess liquidity in global markets, but lack of perspective for the poorest in many parts of the world. What exits do you see?
First, the Colombian government is working on free education for the poorest. Second, unemployment has grown a lot, it is above 23%. The government is subsidizing employment for more than 500,000 young people, and there are a number of entrepreneurial incentives. I would say that these are the most important policies: oriented towards employment, entrepreneurship and youth. The government is also subsidizing small businesses to restore employment levels.

There are many who are against subsidies. But economic and social theory points out that there is no option to overcome great difficulties. Because the biggest difficulty for a democracy is to have poverty levels of 42.5% as Colombia has today because of this pandemic.

At the time of his mandate, there was great expectation for all of Latin America. What went wrong?
I would say that for Colombia what went wrong was that the government we elected in 2010 took our theses and abandoned them. [O governo Santos] It made an alliance with Venezuela, with Cuba, they gave impunity to the FARC. In the name of peace, as they said, they gave absolute impunity to terrorist groups, and what that did was create more violence. They eliminated important programs for the jungle. The previous government also raised taxes heavily, increased corruption, and slowed poverty reduction by slowing investment and the economy. 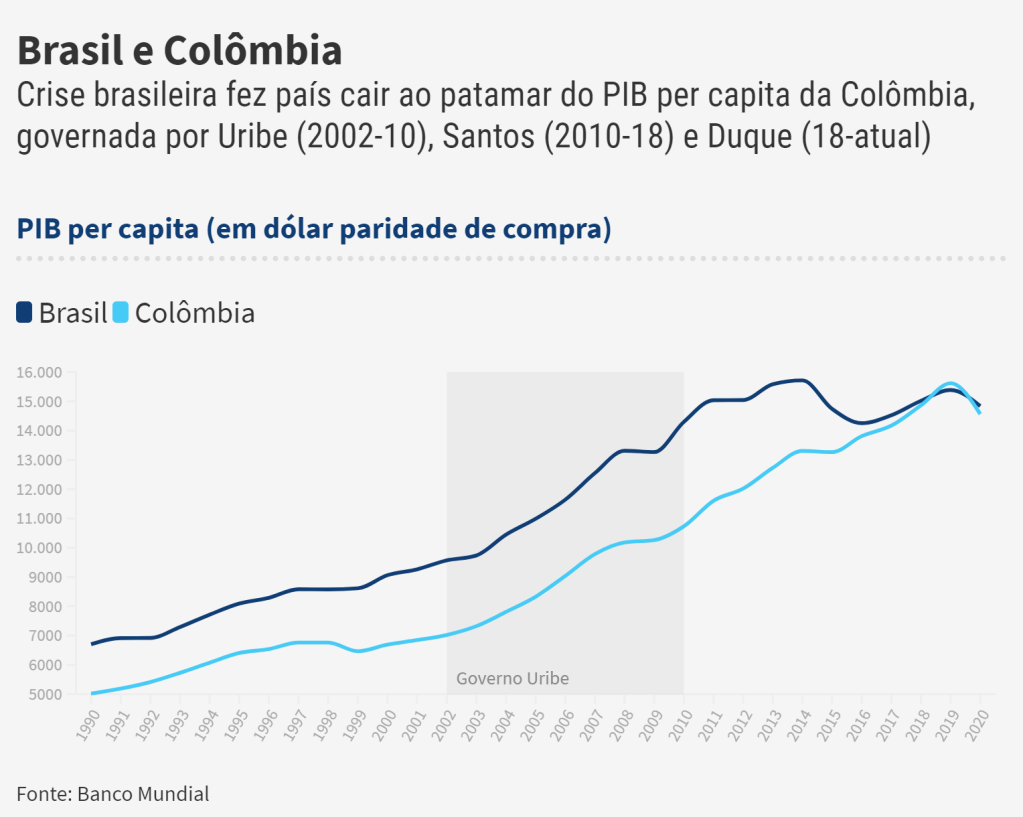 How do you see the relationship between Brazil and Colombia today?
When I was president, we sought a lot of integration with Brazil and with Mercosur. Our two countries have more than 1,600 kilometers of borders, Colombia has 50 million inhabitants, it has a very dynamic economy. I believe this integration is very important, and we have always defended it, throughout Latin America. However, there are groups that reject democratic values, undermine integration and try to impose ideologies, as is the case in Venezuela.

Mercosur has been losing strength in recent years. Do you think that this integration will take place through blocks?
Mercosur is a good step for you [do Brasil] with the countries of the South, it is an instrument to achieve integration. Multilateral integrations are important, such as that of Mercosur with the Andean community, among others. But we must also move forward, when we have to, in bilateral relations.

The region had a wave of the right in recent years, and then names of the left started to grow again. On the other hand, Alberto Fernández missed the primaries in Argentina over the weekend. Has the right failed to respond to the concerns of the population, or do you believe that the dissatisfaction is with whatever government is in power?
I believe there is a challenge for our democracies, which is ensuring security. Security is a democratic value. Another is to guarantee trust to private companies and permanent growth. And there is the challenge of solving social problems. It is necessary to show simultaneously that the economy is growing, and at the same time that social policies are advancing. To pretend to have only a growth of companies without being accompanied by a social policy damages democracy. But these distribution economies, which only focus on the social and do not support private enterprise, also end up failures. I believe that now is the challenge that Argentina has, due to the result of the weekend. How to regain confidence in investment and social sectors. And this is a huge challenge.

In the case of Colombia, the political crisis has intensified with protests in recent years. Do you think the government made mistakes in handling this crisis?
There may have been [erros]. But violent groups have threatened President Duque since he was elected. They carried out violent protests in 2019, and this year they increased those protests. I believe there were reasons to protest that need to be respected, but [houve] violence that must be faced. Poverty rose, and there were sectors that disagreed with the tax proposal presented by the Minister of Finance, which generated a lot of dissatisfaction. But at the same time that we have to give satisfaction about this situation, there was great violence, stimulated by drug trafficking, and for neocommunism and its allies to win the 2022 elections. 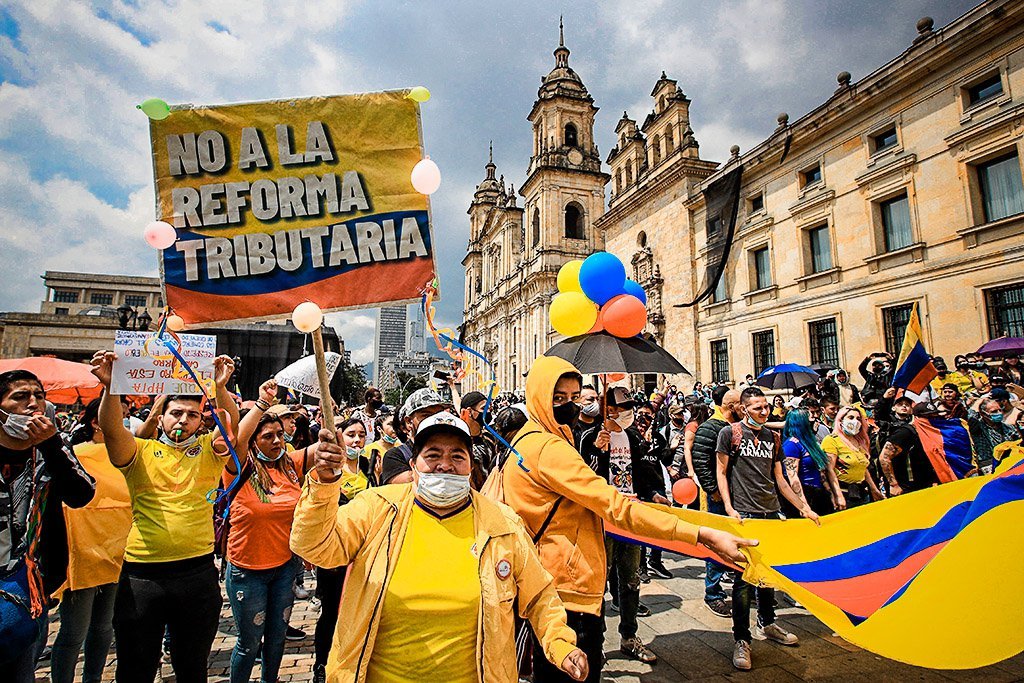 Tax reform sparked protests in Colombia, which later expanded to issues such as poverty and police violence (Daniel Munoz/AFP/Getty Images)

With regard to the environment, Colombia and Brazil have an important share of the Amazon. How do you see the issue of the climate crisis and the role of sustainable development?
It is necessary to preserve this jungle, preserve its rivers, its fauna, its flora, the commitment to the planet. You in Brazil have 40% of the Amazon. Colombia is a very small country close to Brazil, although very large and populous in the Latin American context. And 40% of Colombia’s territory is in the Amazon. It is up to us to preserve this forest. We have to seek income for citizens so that they don’t destroy the environment, pay citizens for the care of the forest, encourage environmental tourism, encourage the scientific use of the forest. But no destruction. The planet has to understand that a resource like the Amazon jungle, the lung of the world, and a resource like water – South America and Central America have much of the planet’s fresh water – have to be preserved.