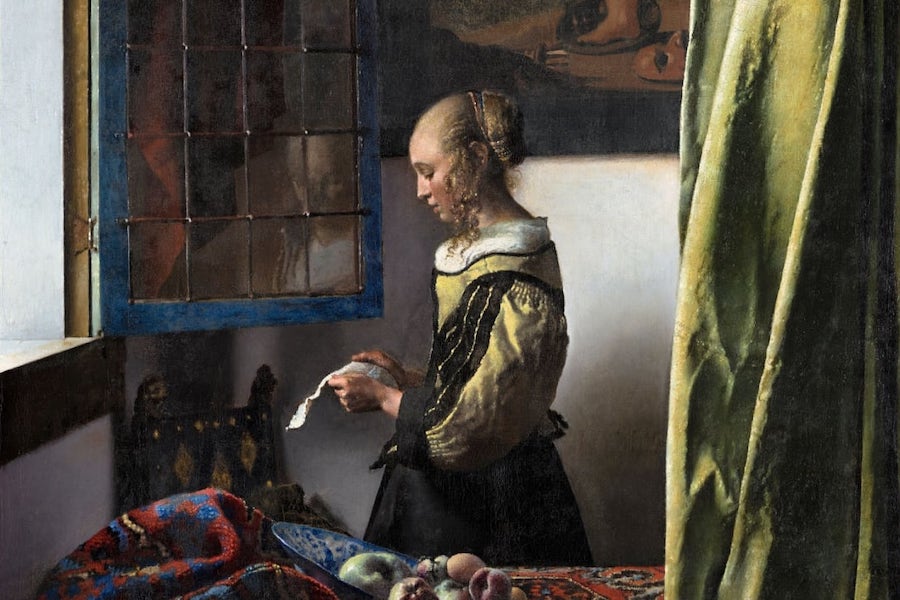 “Girl Reading a Letter to the Window”, by Johannes Vermeer

The painting by the Dutch artist Johannes Vermeer, painted between 1657 and 1659, had an element hidden for about 300 years.

For about three centuries, the “Girl Reading a Letter to the Window”, by the Dutch painter Johannes Vermeer, never gave any hint of what that message said. But, according to CNN, last week, the Old Masters Pinacoteca revealed the secret that was in plain view, but hidden under layers of paint.

Before its next exhibition on the famous painter, this museum in Dresden, Germany, where this painting was housed for much of its life, released a drastically altered picture of the painting.

This is because, after four years of hard work of restoration, the empty wall of the painting now shows a big cupid figure, discovered by X-rays in 1979, but now revealed for the first time.

The revelation of Cupid, the god of love in Roman mythology, often represented as a boy with wings and an arrow, gives the letter new connotations of affection, longing and desire, explains the television network.

It took 250 years, but Vermeer's "Girl Reading a Letter at an Open Window” is finally back to the way the artist intended it. 👼https://t.co/nzok9BISeW

When this hidden figure was first found over 40 years ago, it was believed that the Dutch artist himself had hidden it.

“It was common sense to think that Vermeer had painted over this part of his composition because he had already done it several times”, said Stephan Koja, art historian and director of the German museum, in an interview.

But when conservatives began cleaning up the painting in 2017, they found evidence to suggest otherwise. The varnish on the empty wall behind the young woman was a different color and the consistency of the paint too, explained Koja.

When researchers analyzed samples in the laboratory, they found dirt hidden between the layers of paint, suggesting that someone else added that paint much later.

“We realized that the dirt meant that the painting was finished, having been exposed to the light and circumstances of a room for several decades,” added the director.

The team involved in this work believes that the new painting took place sometime in the early 18th century. But as to who did it, and why, it is not possible to say. And it is likely that this mystery will never be solved.

The painting came from a French collection at the beginning of this century, when Vermeer was not yet well known (he died in 1675, deeply in debt). Stephan Koja suggests the painting may have been modified to look more like the work of Rembrandt, possibly by the hands of the Flemish responsible for the collection, who was also an artist.

Back then, altering someone else’s paint job “was pretty typical,” he explained. “The paintings were changed according to taste. Today, it would be completely inconceivable to touch a Vermeer, but others, centuries before us, didn’t even hesitate.”