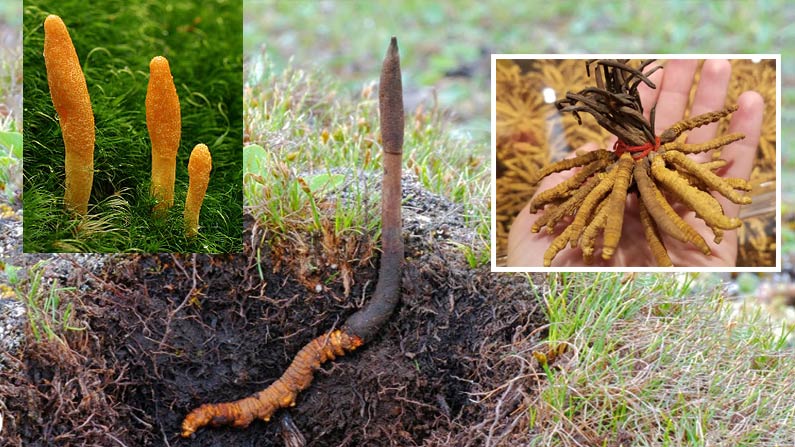 caterpillar fungus: This worm herb is also known as ‘Himalayan Viagra’. It is a livelihood for the people of the hilly areas. After winter .. in the Himalayan plateau ..

World’s Most Expensive Fungus: From fish, crabs to aquatic creatures, to marine insects… You must have heard and read about many creatures. Some are extremely rare on earth while others are extremely valuable. Some species are very rare. They are valued at Rs. Have you heard the name of such an insect that can cost up to 20 lakhs? The International Union for Conservation of Nature (IUCN) is under its auspices. This has been identified as a very rare category.

What is it called?

The worm we are talking about is called an herb. Actually it is a kind of fungus. Its scientific name is ‘Ophiocardiceps sinensis’. In English it is called ‘caterpillar’. In India it is known as the ‘Worm Herd’ and in Nepal and China it is also known locally as the ‘Yarsagumba’.

This is the place where it is available.

This worm herb is also known as ‘Himalayan Viagra’. It is a livelihood for the people of the hilly areas. After winter, when there is less snow in the Himalayan plateaus, people go here to collect them. The people here collect these and go downstairs and sell them to the traders there. The traders who buy here export these to big markets as well as various countries. Every year in Asia Rs. Turnover is over 100 crores. It is very rare .. not only that it is very expensive.

The most expensive fungus of all .. is more valuable than gold. What are its benefits? If you take a look at that .. at first it is sweet in taste. Is about two inches long. Himalayan Viagra is used in many things, including medicines that increase strength. In addition to boosting the immune system .. It is effective in the treatment of diseases related to the liver. It is also known to be useful in the treatment of cancer. A ‘caterpillar’ costs Rs. Estimates range from 1,000 to 2,000

The price of a ‘caterpillar’ depends on country conditions, weather, etc. But according to a TOI report, its price could be as high as Rs 20 lakh per kg. It is in high demand in countries like China and Hong Kong. In China, worm herb is used as a sexual stimulant. At the same time, athletes also use it as a steroid.

Himalayan Viagra is produced from Yersagumba / caterpillar fungi with sap from some plants growing in the mountains. They are only six months old. These are often produced in the winter. These increase with May-June-July but they end up appearing. The people of the hilly areas collect them and sell them in the markets. In most parts of India, the collection of caterpillar fungi is legal, but doing business is illegal.

It had previously been banned in Nepal, but was later lifted. The people of Nepal set up tents in the mountains. Not only that but they stay there for many days to collect these.

Platform Ticket: If you have a platform ticket you can travel by train .. Do you know how!